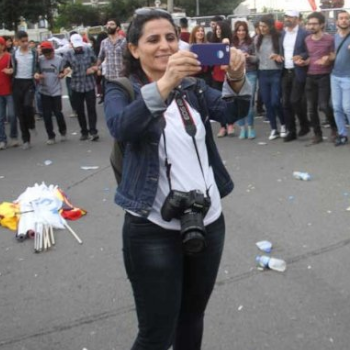 During the hearing on April 16, the court ruled the prosecutor’s final opinion to be delivered to Evren in person in its interim decision, ruling the continuation of Evren’s detention. During the hearing on May 7, the court requested a copy of another case file from an Ankara court where Evren appears as a defendant, asked for additional information on accusations.

During the eighth hearing on November 12, 2019, Evren was released under judicial control measures and with a travel ban after 13 months in pre-trial detention. The trial was adjourned until March 10, 2020.

Due to health problems, Evren didn’t attend the March 10 hearing. Her lawyers presented a medical report to the court about her condition and requested to postpone the hearing. The court lifted Evren’s obligation to give signature monthly at the police station but rejected the request to lift her international travel ban. The trial was adjourned until July 14.

Evren did not attend the July 14 hearing due to health problems. The court ruled Evren to be present in the courtroom for the next hearing and to submit her defense statement.

During the hearing on November 26, 2020, Evren’s lawyer requested their witnesses in Antalya and Ağrı to be heard in the court. The court accepted the request.

The court further requested a copy of the indictment filed previously against Evren before Mersin 2. High Criminal Court.

Evren and her lawyers attended the hearing on March 9, 2021. The court heard a witness who said he did not witness any activities of Evren in relation to a terrorist organization. Evren stressed that she currently works for the Jinnews site and rejected all allegations. Evren’s lawyers requested the case file against Evren before Mersin 2. High Criminal Court to be merged with the case.

The court ruled to evaluate this request during next hearing and adjourned the trial until June 24 for all missing documents to be completed.