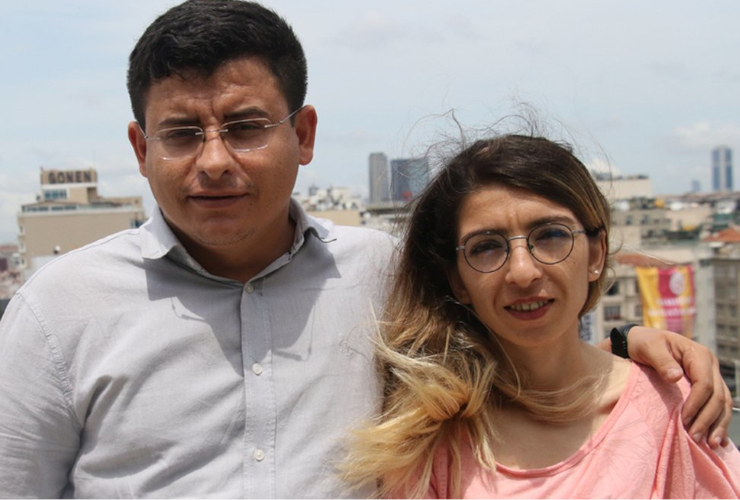 Sadiye Eser and Sadık Topaloğlu, reporters for pro-Kurdish Mezopotamya News Agency, were arrested on December 3, 2019, on the charges of “membership of a terrorist organization” in Istanbul as part of simultaneous police operations in several cities.

Initially detained on November 29, 2019, both journalists were accused on the basis of a witness statement, for  participation in press events, earlier detention in the ongoing KCK Press trial and digital material found on their phones, including Kurdish songs.

On December 3, 2019, they were arrested on the basis of the statements of a person named “Özgür Baran” and their previous trials. Both Eser and Topaloğlu were held in prison, former in Bakırköy Women’s Prison and the latter in Metris Prison, İstanbul until they were released on March 26, 2020.

In the indictment, Topalopğlu’s detention in the 2011 operation against Kurdish press institutions and his travels abroad with his passport from 2009 to 2015 were regarded as “criminal evidence.”

As for Eser, the social demonstration she followed, her arrest with the operation carried out in 2012, and her trips abroad were regarded as “criminal evidence.” Her failure to give her mobile phone passcode in detention was added to the indictment as “having a terrorist organisation attitude.”

Kurdish music found in Eser’s MP3 player was also added to the indictment.

Critical Mezopotamya News Agency which Eser and Topaloğlu worked for was regarded as an “illegal” entity.

During the hearing held at the Istanbul 22. High Criminal Court, the court ordered Topaloğlu and Eser to be released with judicial control measures.

Topaloğlu’s lawyer requested the witness’ boss and another previously-heard witness to be heard in the court as well. The court accepted the request.

The court further decided to lift the judicial control measure of reporting to a police station imposed on Topaloğlu and to return the digital materials that had been confiscated. However, the court did not lift the international travel ban on both journalists.

The third hearing took place on March 9, 2021. Journalists Topaloğlu and Eser and their lawyers attended the hearing. The court heard two witnesses testified on behalf of the journalists. One of the witnesses said that he was at home whenTopaloğlu was detained and the money that belonged to him was seized.

Topaloğlu’s lawyer stated that Topaloğlu needed to go abroad for a medical operation and requested the judicial control measures against him to be lifted. The court decided to issue an order to forcefully bring the third witness in the case to the next hearing and rejected the request to lift the judicial control order against Topaloğlu.

During the fourth hearing on June 8, 2021, the court ruled to write another request for one of the witnesses in the case to be heard during the next hearing. Topaloğlu’s lawyers objected this request stating that the witness in question had given false testimony against Topaloğlu previously in another case, therefore his statements cannot be considered correct.

The court ruled to adjourn the hearing to September 21, 2021.