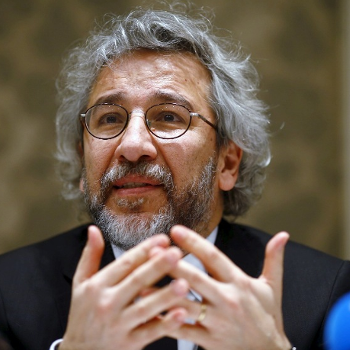 Possible sentences: up to 3 years

Can Dündar, former editor-in-chief of Cumhuriyet newspaper, is being tried for his participation in the solidarity campaign “Editors-in-Chief on Watch”, for the pro-Kurdish newspaper Özgür Gündem.

A number of editors, journalists and columnists for the now-shuttered Özgür Gündem newspaper were brought before the court on accusations of “overtly inciting a crime” and “producing terrorist propaganda” for the daily’s articles and reports.

Dündar and Özgür Gündem’s publisher İnan Kızılkaya were charged with “publishing materials of a terrorist organization”. Kızılkaya’s case was separated from this file and merged with the Özgür Gündem main trial at the beginning of the prosecution.

Dündar currently lives in Germany, having fled the country after a gunman attacked him in front of the Çağlayan Courthouse, in İstanbul. Dündar was not injured in the incident.

During a hearing on September 4, 2018, the court requested the execution of Dündar’s arrest warrant in an interim decision and adjourned the trial until January 31, 2019.

During the hearing on November 28, 2019, the court decided to wait for the execution of the arrest warrant against Dündar and for the response to the documents sent for Dündar to Germany.

During the 13th hearing on December 24, 2020, the court decided to wait for the execution of the arrest warrant against Dündar and postponed the hearing until June 24.

Dündar also faces charges of “obtaining secret documents for espionage” and “aiding a terrorist organization whilst not being a member” in separate cases after Cumhuriyet reported that trucks belonging to Turkey’s National Intelligence Service (MİT) allegedly carried weaponry across the border to Syria.

Previously, a court sentenced Dündar to five years and 10 months in prison on the charges of “obtaining and revealing secret documents for espionage”, while ordering sentencing on the charge of “aiding a terrorist organization whilst not being a member” to proceed separately.

During the 14th hearing on June 24, 2021, the court ruled to wait for the execution of the arrest warrant issued against Dündar and for the response of the rogatory document written abroad.