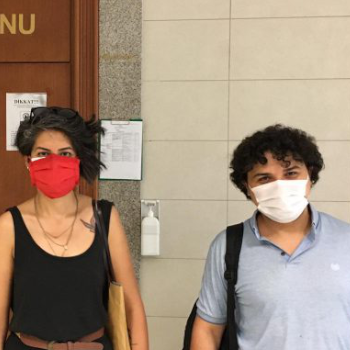 Possible sentence: One to three years

Canan Coşkun and Ali Açar, reporters of Cumhuriyet newspaper along with BirGün reporter Can Uğur face criminal charges over their reporting on the investigation opened over the death of 15-year-old Berkin Elvan who died after being hit by a tear gas canister on the head during Gezi Park protests in 2013.

Journalists are accused of revealing the identity of a police officer, who is a suspect in the murder investigation, on the charges of “targeting public officials who participated in anti-terror operations”. According to Anti-Terror Law Article 6, journalists are facing a prison sentence from one up to three years.

The investigation was opened in 2016 against the news articles titled “Police officer allegedly shot Berkin Elvan didn’t remember his place of duty” which was published in Cumhuriyet and in BirGün newspapers with the title “The reason for confidentiality order on Berkin investigation: Police officer’s reputation be damaged”.

Due to suspension of all judicial proceedings in March and April because of COVID-19 pandemic, the first hearing on April 9 was postponed to September 17.

IPI monitored the second hearing in Istanbul. Court ruled journalist Ali Açar, the third defendant in the case, to be present in the courtroom next time and granted additional time for the missing documents in the case file to be completed.

Journalist Ali Açar gave his defense statement, rejecting the accusations. He said that he had no intention of targeting the public official. The lawyers were granted additional time to examine the documents submitted to the case file and to prepare a final defense statement.

The next hearing is scheduled to take place on February 23, 2021.