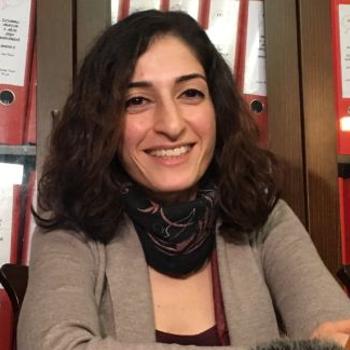 She is accused of having ties with the outlawed Marxist-Leninist Communist Party (MLKP). At a hearing on April 26, 2018, Meşale’s case was heard along with 18 defendants and was then merged with another case that has nine defendants. All defendants asked for an acquittal, as well as the removal of the security check and travel ban placed on them.

At the eighth hearing of her case on January 10, 2019, Tolu was not in attendance. The court decided to re-evaluate the defense’s requests, only after hearing an anonymous witness’s statement and adjourned the next hearing until May 23, 2019.

On May 23, the anonymous witness, on whose testimony the indictment was primarily based on, could not be heard due to technical issues. Next hearing took place on October 11.

During the hearing on October 11, the anonymous witness was heard, who claimed to be familiar with the defendants from the Gezi Park protests, yet cannot name them in person. Witness also stated that (s)he did have the knowledge about defendants’ relation to any organization.

The court adjourned the hearing until February 25, 2020, in order for prosecutor’s final opinion to be heard.

On the hearing on February 25, the court decided to send the case file over to the prosecution for the final opinion to be prepared unless the lawyers’ petitions demanding the prosecution to be extended is approved. The trial was adjourned until July 14.

During the July 14 hearing, Tolu’s lawyer requested an extension in prosecution for further investigation of allegations that her client’s attendance to events cited as criminal evidence. “We want [thorough] investigation whether there is a crime detected on the date of the alleged crime,’’ Tolu’s lawyer stated.

During the fourteenth hearing on February 11, 2021,Tolu was represented by her lawyers in the courtroom.  Tolu’s lawyers requested for  judicial control measures on Tolu be lifted and for return of the seized  materials’ if digital analysis was completed.

The court rejected lawyers’ request to expand the investigation into the case and granted additional time to defense lawyers to prepare defense statement against the expert report on digital materials and decided to return the materials to defendants.