IPI: At least 241 journalists faced trial in Turkey in 2021 – nearly half on terrorism charges

IPI publishes results of its trial monitoring programme for 2021

The year 2021 saw the continued persecution of the free press in Turkey. IPI documented the trials of 241 journalists last year, of whom 28 were convicted. The vast majority of open cases were adjourned into the new year, part of the cycle of never-ending judicial harassment.

The International Press Institute (IPI) today published the annual statistics of its trial monitoring programme on Turkey as part of its Free Turkey Journalists campaign. IPI has been closely following trials against journalists in Turkey in recent years as part of its local and international advocacy efforts.

As part of IPI’s trial monitoring, IPI representatives have monitored a number of hearings in Turkey’s courtrooms in-person. In addition, IPI has documented developments in more than 100 trials through its own research, complemented by updates from monitoring work done by local CSOs including the Media and Law Studies Association (MLSA), Press in Arrest, P24, Bianet, and RSF Turkey.

See IPI representatives’ trial monitoring blogs here. In 2021, IPI monitored a total of ten trials in person in Istanbul and in Van.

In 2021, IPI monitored and recorded a total of 294 hearings across 135 separate trials that involved the prosecution of at least 241 journalists. Of those trials, 16 ended in a conviction. In total, 28 journalists were convicted, resulting in a cumulative total of 83 years of sentencing. Nine of those convictions were for terrorism-related charges and two for insulting the president, two of the most common types of charges against journalists.

The trials recorded by IPI may not represent the full extent of the judicial harassment of journalists in Turkey in 2021. The office of Utku Çakırözer, an MP with the opposition Republican People’s Party (CHP), released a report stating that journalists had been brought before a judge 475 times last year.

According to IPI’s data, out of the 294 hearings, 38 (12 percent) ended with the acquittal of all defendants and 16 (5 percent) ended with convictions. In four of these cases with multiple journalists as defendants, some journalists were convicted and some were acquitted. By far the most common outcome was adjournment: in 83 percent of the hearings (244 hearings) proceedings were adjourned to a later date.

IPI sends out a monthly update of its trials calendar and trial monitoring data to a wide list of civil society and diplomatic institutions in Turkey. In the form of factsheets, these updates also encourage diplomatic representatives to monitor and take collective action to show support for journalists on trial, especially in the case of hearings taking place outside of Turkey’s major cities. You can find the factsheets here. 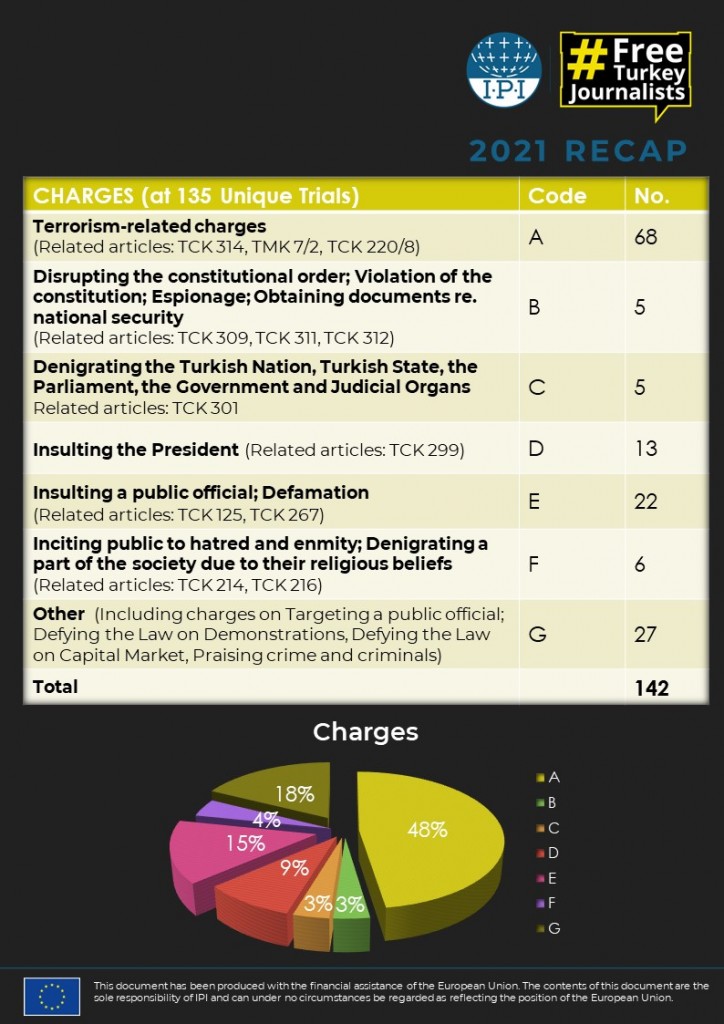