More than 29 human rights, cultural and film organizations condemn in an open letter the prosecution of Turkish documentary filmmakers Çayan Demirel and Ertuğrul Mavioğlu and ask for the charges against them to be dropped immediately.

Numan Kurtulmuş
Minister of Culture and Tourism of the Republic of Turkey
İsmet İnönü Bulvarı No:32 06100
Emek Ankara, Turkey

We, the undersigned cultural and human rights organizations, call upon the Public Prosecutor’s Office of Batman to drop charges immediately against filmmakers Çayan Demirel and Ertuğrul Mavioğlu and to cease efforts to criminalize the film and its makers. We also urge the Ministry of Culture and Tourism of the Republic of Turkey and the General Directorate of Cinema to support both filmmakers and to advocate for charges against them to be dropped. The upcoming court proceeding against Demirel and Mavioğlu comes at a time when artists, academics, and journalists in Turkey are being criminalized in alarming numbers for the peaceful exercise of their free speech.

On May 29, Demirel and Mavioğlu will appear in front of the Batman 2nd Assize Court. Both filmmakers stand charged with disseminating propaganda in favor of a terrorist organization under Article 7/2 of Law no. 3713 on Counter-Terrorism for their documentary film Bakur and face up to five years of imprisonment if found guilty. The feature-length documentary, shot in the summer and fall months of 2013, shows the daily life of PKK members in three different camps in southeast Turkey. The timing of both the filming and production of Bakur coincided with the peace talks between the Turkish government and the PKK to end a 40-year conflict during which a ceasefire was in place.

As the peace talks unraveled, Bakur was scheduled to premiere at the 34th Istanbul Film Festival on May 5, 2015, but on that day, the İstanbul Foundation for Culture and Arts (İKSV) canceled the screening. The film was subsequently shown in numerous other international and national festivals, but two years later, on December 20, 2017, the filmmakers were accused of disseminating terrorist propaganda and giving “legitimacy to the terrorist organization PKK/KCK’s methods of using force, violence or threats.” If found guilty, this would be the first time that filmmakers in Turkey would face a prison sentence due to a film, a dangerous precedent for the status of freedom of expression. However, as an attack on peaceful exercise of the right to free expression in Turkey, Bakur is not an isolated case. Numerous journalists, scholars, writers, and artists are currently facing similar criminal prosecutions. 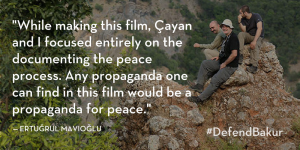 The right to freedom of expression, whether in a film, newspaper, painting or peaceful protest is an essential part of a functioning democratic society and the development of vibrant cultures. Artistic expression can play a productive role in addressing conflicts, reconciling former enemies, and can contribute to developing trust between individuals and groups that have experienced protracted conflicts. Turkey has affirmed this and made international commitments to uphold these freedoms, having ratified, both the International Covenant on Civil and Political Rights (ICCPR) and the European Convention on Human Rights (ECHR). The right to freedom of expression is also protected in the Turkish Constitution (Article 26), which states that “Everyone has the right to express and disseminate his/her thoughts and opinions by speech, in writing or in pictures or through other media, individually or collectively.” Based on these commitments, Turkey can only exclude controversial works from the protections granted to free speech in exceptional and strictly defined circumstances where national security is under threat because the work would constitutes “an incitement to discrimination, hostility or violence” as expressed in the article 20 of the ICCPR. Further, based on the Principle 6 of the Johannesburg Principles, the expression may only be punished as a threat to national security if a government can demonstrate that it is intended or likely to incite violence.

Bakur does not incite discrimination, hostility or violence, but rather documents an attempt to reach a peace agreement after a decades-long conflict between the PKK and the Turkish government. Its purpose, as stated in the film’s own trailer, is “to invite its viewers to reflect on a war that has been continuing for decades and give an insightful look on its main subject, the PKK.” Such creative work is clearly and unequivocally protected in accordance with Turkey’s domestic and international commitments. Turkey must uphold its domestic and international commitments to protect freedom of expression and ensure that artists are free to create without fear.