Photo credit: Evrensel newspaper. Disputed image from the anniversary ad. Turkish text reads as follows: "[Evrensel] is the voice of those who want to live in peace and fraternity"

The International Press Institute (IPI), a global network of editors, media executives and leading journalists for press freedom, called on Turkey’s Ministry of Trade to withdraw a fine against critical newspaper Evrensel over a television advertisement marking the newspaper’s 25th anniversary.

Evrensel reported on Monday that the Ministry of Trade’s Directorate General of Consumer Protection and Market Surveillance had issued a monetary fine of 20,953 Turkish Lira against the newspaper over the ad, which aired on television broadcaster TELE 1 in June 2020.

In the advertisement, the newspaper, which is one the few remaining critical print outlets in Turkey, had called for a social media gathering to mark its anniversary on June 7 with a message calling for equal labour rights, gender equality, artistic diversity, peace and press freedom.

According to the decision delivered to the newspaper, the Ministry claimed that an image in the ad of a young girl holding a shawl of red, green and yellow colors, which are associated with the Kurdistan flag, condoned, promoted and supported illegal activities, therefore running contrary to the Law on Consumer Protection No. 6502.

TELE 1, one of the few remaining TV broadcasters critical of the government, itself had previously been fined by Turkey’s Radio and Television High Council (RTÜK) over the disputed advertisement. IPI called for that fine to be revoked last August in a statement.

IPI Turkey Programme Coordinator Renan Akyavas urged the Ministry to revoke the monetary fine against Evrensel and to stop arbitrary attempts to control and pressure the media.

“This fine once again clearly demonstrates the immense pressure on free media in Turkey”, Akyavas said. “The fine on Evrensel is part of a growing trend of fines issued by state and regulatory bodies against the country’s remaining independent news outlets as part of an effort to pressure and harass them. We call on the Ministry of Trade to revoke the fine without delay.”

Fatih Polat, the editor-in-chief of Evrensel, told IPI that “the reasoning of the fine imposed is a two-second-long image from a forty-five seconds long advertisement. The image was from a Newroz celebration from 2015, only showing a child holding a shawl of red, green and yellow colors. There is nothing in the image relating to a terrorist propaganda as the Ministry claims.”

“This fine is an attempt to silence and censor media through a financial blockade. We will stand firm in our goal for freedom of press and right to be informed”, Polat added.

The recent upsurge in large monetary fines by state authorities and regulatory bodies raises further concerns over the Turkish government’s attempt to pressure critical voices and to control the media. Regulatory bodies such as the Radio and Television High Council (RTÜK) and the Press Advertising Agency (BİK) have already imposed several penalties, in the form of monetary fines or ad bans, on critical outlets such as Evrensel, Sözcü, Cumhuriyet and TELE 1.

The arbitrary penalties place immense financial and censorship pressure on media, as IPI warned in its recent Turkey mission report. Ad bans are particularly problematic for smaller news outlets, for which public advertising is an important source of revenue. Exorbitant fines add to existing financial pressure on media, potentially forcing outlets to shut down their operations or to self-censor to avoid penalties. 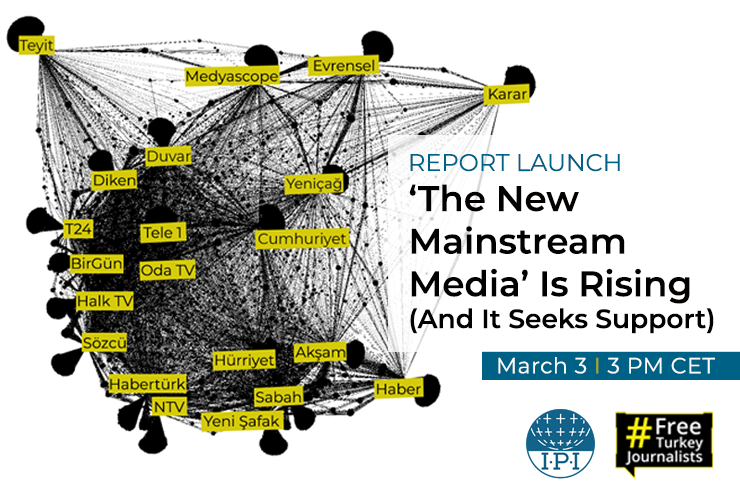