Cumhuriyet columnist and IPI Board Member Kadri Gürsel delivering a stirring defence of the rights of journalists on Monday as he stood in court to face sham charges of aiding terrorism.

Gürsel, who faces up to 15 years in prison, is one of 17 prominent Cumhuriyet journalists and executives on trial this week in Istanbul’s Çağlayan courthouse. The trial is one of the most significant in Turkey since the country abolished official censorship on July 24, 1908.

In his remarks to the court, Gürsel defended the integrity of his work and dismantled the individual accusations against him, which IPI and other groups consider to be politically motivated and brought in retaliation for Gürsel’s criticism of the Turkish government.

Gürsel told the court that his foresight regarding Turkey’s growing authoritarianism had been proven correct. Otherwise, he said, “I wouldn’t be on trial today as a criminal of thought, and I wouldn’t have had to wait nine months in prison before having the opportunity to refute all of these baseless, empty and unfounded accusations in front of a court”.

The trial, which is expected to continue until Friday, has been widely condemned by human rights groups and has received extensive media coverage around the world.

Gürsel’s remarks have been translated into English from the original Turkish and substantially condensed for purposes of brevity. In some cases, the remarks are paraphrased for clarity.

In the indictment I am charged with “helping an armed terrorist organization while not being a member”.

The first specific accusation is that I communicated with 92 suspicious individuals who use ByLock, as well as 21 people who are under investigation for ties to the FETÖ/PDY [ed.: the Turkish government’s name for the movement led by the cleric Fethullah Gülen] armed terror organization.

The second accusation is that, as a publishing consultant for Cumhuriyet newspaper, I had first-degree signatory power.

The second accusation is that, as consultant for the Cumhuriyet newspaper, I have first hand signature authority at Yenigün Haber Ajansı Basın A.Ş. [ed.: the publisher of Cumhuriyet] and that I am responsible for the alleged radical policy change at Cumhuriyet and for the kind of publishing that serves the manipulative aims of the FETÖ/PDY and PKK/KCK organizations.

And finally, based on my 12 July 2016 column entitled “Erdoğan wants to be our father,” I am accused of “openly and directly targeting the president’s personality and trying to create a perception that there is an authoritarian regime in Turkey”.

All of these accusations are unreal.

Let’s start with the first accusation. The claim that I communicated with 92 ByLock users and 21 other people under investigation for ties to FETÖ/PDY is completely unfounded. The alleged communication with 102 of the 112 people [noted in the indictment] consists of only one-sided SMS messages (85 persons) and/or one-sided telephone calls (17 persons). Since I didn’t answer any of these SMS/calls, it cannot be claimed that I was in communication with these people. On the contrary, we can only speak of their efforts to contact me – efforts that remained unsuccessful. In other words, these people communicated with me, but I did not communicate with them.

I had communication with only eight of the 112 people claimed in the indictment. Five of those eight people are ByLock users, and of course these five people are persons with whom I was in contact for reasons related to my journalistic profession in an absolutely legitimate manner. Of course, there is no way that I could have known or guessed that these people were going to be ByLock users.

It shouldn’t be forgotten that journalists are curious people and [in the course of their work] they meet different people. This activity cannot be a crime and cannot be punished in a democracy. This is called journalism, and journalism is not a crime.

If the prosecution couldn’t figure out that 95 percent of the claimed communication with 112 ByLock users and FETÖ/PDY suspects consisted of SMS messages that were sent to me once and went unanswered, or were one-sided calls, and as such cannot be evaluated as “communication,” then the prosecution neglected its duty.

[With regard to the second accusation, Gürsel stated that they are groundless in every sense. He said that he never had first-degree signature authority at Yenigün Haber Ajansı Basın A.Ş. and added that the reason the prosecution believes this is that this incorrect information was contained in a police report sent to the prosecutor’s office on 4 November 2016. Gürsel suggests that it would be naive not to consider the possibility that this false information was provided deliberately and states that the police information was full of slander. He asks whether the prosecution actually saw the “official” list of authorized signatures of Yenigün Haber Ajansı Basın A.Ş., which was also included in the police report and which would have shown that his name was not on the list.]

To make any connection between my position as an editorial consultant [at Cumhuriyet] and the alleged policy change of the newspaper defies logic. First of all, the publishing consultancy, for which I was only able to work for 34 days before I was taken into custody, is not a position from which one can make decisions or changes regarding the policy of the newspaper. The publishing consultant is the person whose opinion is asked if needed. The decision whether to take the consultant’s opinion into consideration or not lies with the management. In any case, how and when could a publishing consultant, who started his job on 27 September 2016 and who could only perform his job for 34 days, make a radical policy change at Cumhuriyet?

[Gürsel points out that the indictment claims that Cumhuriyet was infiltrated by FETÖ/PDY beginning in 2013. He questions how he could have committed the “crime” of changing the paper’s policy if that had been the case. He states again that if the prosecution couldn’t figure that out, it had neglected or abused its duty.]

Because of the column [of 12 July 2016], I am also accused of trying to create the perception that there is an authoritarian regime in Turkey. This is not a legal accusation, but a political one. The job of a journalist is not to create perceptions, but to evaluate the facts in an objective way. If a journalist expresses an opinion, he supports this with facts. My impugning column involves an opinion that is supported and confirmed by unshakeable facts.

On top of that, I am a columnist who has been openly warning for years, in every medium, that the [Turkish] regime is becoming more authoritarian. In 2009, I wrote a column for [the newspaper] Milliyet called “We are on our way to an authoritarian regime with elections.”Since then, I have warned in many columns of the regime’s increasingly authoritarian tendencies.

Unfortunately, my foresight has become real. Otherwise, I wouldn’t be on trial today as a criminal of thought, and I wouldn’t have had to wait nine months in prison before having the opportunity to refute all of these baseless, empty and unfounded accusations in front of a court.

[Gürsel makes specific reference to his column of 12 July 2016, which noted an incident a few days prior in which Erdoğan saw a Bulgarian minister smoking and took the minister’s cigarette pack away. This incident was the starting point for developing the view that Erdoğan “wants to be our father”.]

All these charges against me not only lack intelligence and logic, but they are also outside of any standard of law and conscience. These charges only produce injustice.

[Gürsel notes that he is “weirdly associated” with the claim that members of the board of Cumhuriyet assumed their positions via irregular methods. He points out that, at the time that the board changes in question took place, he was working as a columnist at the newspaper Milliyet, so could not possibly have had anything to do with those changes.]

If I am testifying here in front of you as a “defendant,” the reason is that my name was caught up last minute in the political operation to purge Cumhuriyet. The aim of including my name was to shut up and isolate me. The view was that the only way to shut me up just before Turkey was preparing for a constitutional referendum was to arrest me.

The operation against Cumhuriyet was also used as an opportunity to arrest me and make it impossible for me to write, speak or perform journalism. This occurred to them at the last minute.

The reason that I am here in front of you is not because I “helped a terror organization while not being a member.” It’s because I was an independent, critical, questioning journalist and because I have never compromised my work as a journalist and always insisted on doing my job correctly.

I was punished in advance by a long period of pre-trial detention because I succeeded in remaining a journalist, despite all of the government’s oppression and threats.

You cannot find any single real piece of evidence that would support the charges against me because nothing in my attitude, words or articles provides any evidence. On the contrary, I have always approached the organization in question [FETÖ/PDY] with maximum suspicion my entire career. I have always been strictly critical of them. When FETÖ was known as Cemaat, and when this Cemaat was working together with the AKP government, my view toward this structure was categorically negative. And my view on this never changed.

I exposed the de facto coalition partnership between the current government and this group in the past, and I foresaw the damage that this sinister cooperation would cause to the country. On several occasions I highlighted the plots that what was then called Cemaat carried out with the support and power of the government and several times I expressed that the AKP could also be a victim of this alliance. A lot of the articles I have written and the things I have said on TV prove this. All my foresight became real. Everything is in the archives. The accusations against me have taken on a surreal dimension with lies and forgeries, without even the need to base them on fake evidence.

I had to spend nine months at Silivri Prison before I could express these truths in front of a court. This punishment by extended pre-trial detention is against the law and is a violation of human rights in and of itself.

In view of all the issues I have mentioned, I respectfully request to receive a verdict of not guilty.

Press freedom is under threat. But you can help.

To Our Readers: We need independent news and information more than ever, but journalists around the globe are increasingly under attack for doing their jobs. IPI works every day to support independent journalism and the free flow of news. But we need your help. By becoming an IPI member or supporter, you strengthen our mission to protect everyone’s right to be informed. 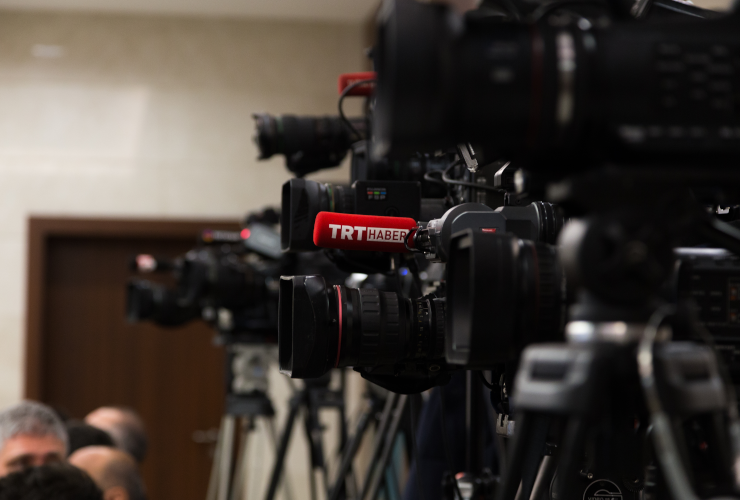