Turkey Trial Blog: The view from the most interesting cafe in the world

International Press Institue (IPI) Turkey National Committee Vice Chair Emre Kızılkaya monitored the first hearing of the retrial of Erol Önderoğlu, an IPI member and the Reporters Without Borders (RSF) Turkey representative, as well as his two co-defendants, Şebnem Korur Fincancı and Ahmet Nesin. The three were back in court after their acquittals were overturned by an appeals court. They were put on trial for participating in a solidarity campaign with now-shuttered pro-Kurdish Özgür Gündem newspaper in 2016.

IPI, along with 16 other international press freedom groups, called for the journalists’ and rights activists’ immediate acquittal ahead of the hearing. However, the court abided by the appeals court ruling to overturn the acquittals and adjourned the hearing until May 6.

Below are the observations from Kızılkaya on February 3 hearing.

I had written about this cafe in my column for the Turkish newspaper Hürriyet four years ago, hours after a decision in our favor by a court ruling there.

That day, in 2017, the court decided to release IPI Executive Board Member Kadri Gürsel, who was then a columnist for the daily Cumhuriyet, after he spent a year in jail on baseless, politically motivated charges.

It was raining then, on a late-night in September. The vast, empty square in front of the Çağlayan “Justice Palace” was cool and windy. We were waiting for the verdict at the tiny cafe across from this gigantic complex that houses the courts.

It was strange for me to overhear the chats of other people in the cafe, named Secret Garden: criminal suspects on bail, as well as the relatives and attorneys of arrested convicts. Most cases were about serious crimes, including homicide and human smuggling.

As I had to listen to the horror stories in that tiny cafe, a bitter smile was inadvertently placed on my face. In a moment of epiphany, I perceived the tragicomic aspect of our own situation: Just as the government had put dozens of our journalists in jail under the same roof with real criminals, it had also forced us, the press freedom advocates, into this cafe with the suspects on bail and the relatives of convicts.

As journalists and press freedom advocates, we were only doing our jobs to inform the public and advocate for free speech, but this was where we ended up. Luckily that night, though, at least one of us would get back his usurped freedom. Hence, I raised my glass of tea with other press freedom advocates, including my friend and colleague Erol Önderoğlu, an IPI member and the representative of the Reporters Without Borders in Turkey.

Today, it was Erol himself on trial. And as I witnessed yet another trial at Çağlayan, I saw once again how easy it is for a government to arbitrarily push you from the cafe to the courthouse and then perhaps to the jail when the rule of law and the freedom of the press is severely undermined.

I don’t know how many press freedom activities we jointly participated in with Erol in the past ten or more years. . With all his honesty, sincerity and hard work, Erol always did everything he could do to improve the press freedom situation in Turkey.

He stood trial himself on February 3 on charges of “propagandizing for a terrorist organization,” “openly inciting to commit crimes” and “praising the crime and the criminal.” He faces a possible 14-year prison sentence simply because he became an “editor-in-chief” of the now-closed Özgür Gündem newspaper in 2016 for two hours in a symbolic act of solidarity.

The latest hearing on Erol’s case was the beginning of a retrial because an appeals court had overturned an earlier acquittal in the case in which the physician and human rights advocate Şebnem Korur Fincancı and writer Ahmet Nesin were co-defendants.

After the press freedom solidarity campaign for Özgür Gündem in 2016, Erol was handcuffed, interrogated, and kept under arrest for 10 days. Then he had endured a four-year trial process. And now, suddenly, his acquittal was reversed. As a result, he was back here at Çağlayan again, as a defendant in yet another sham legal case.

Seventeen press freedom and human rights NGOs, including IPI, expressed support for Erol before today’s hearing. “The retrial of this tireless free speech advocate is a dreadful illustration of the witch-hunt waged by President Erdoğan’s government against its media critics. Currently, Turkey is Europe’s biggest jailer of professional journalists, and the few remaining independent media outlets are continuously harassed and marginalized, while detained journalists and closed media are denied any effective legal recourse,” their joint statement said.

On behalf of IPI, I monitored the first hearing of the retrial in the 13th Heavy Penal Court at Çağlayan, sitting right behind my friend and colleague Erol, someone who is on both sides of the aisle: A human rights campaigner and also a citizen whose human rights are violated. A press freedom advocate and a journalist whose freedoms were trampled on. An observer in a court and a defendant in a case.

The court accepted the ruling that reversed the acquittal and adjourned the hearing to May 6 by merging Erol’s case with another ongoing trial involving the defunct Özgür Gündem newspaper.

As we left the courtroom, Erol told me he was not surprised. “I see this ruling as an example of the lack of courage in local courts’ defence of legal justice”, he said. As he and his attorney stressed, it seems that the politicization of the courts continues despite the government’s promise of “judicial reform.”

After today’s trial, I wanted to have a tea while writing this blog post but the tiny cafe was out of bounds. Not because of the pandemic, but because the never-ending “urban renewal” project around the Çağlayan Square had shut it down. The project’s main goal was to “gentrify” this district, which some describe as an inner-city ghetto. 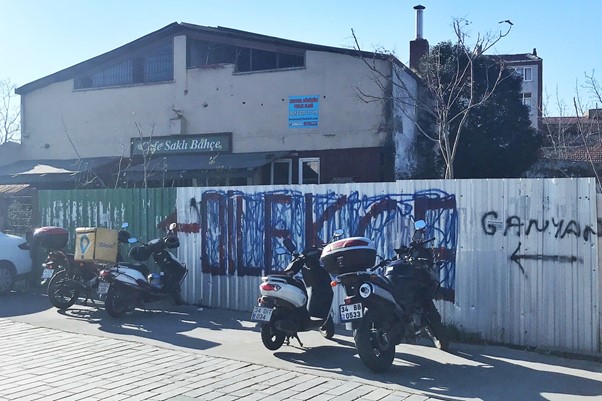 After seeing this view today, I thought that these “reforms” and “renewals,” like the massive public construction projects, have something in common: They try to create an impression as if something changes for the good of everyone. In reality, the powerful people usually get even more power and wealth through such schemes, while the weakest and the poorest end up even worse off. Meanwhile, those who question the powerful for the benefit of the whole public — journalists and press freedom advocates — keep on doing so whatever the personal cost will be.

Starting with Erol, I salute all of those who risk their own wellbeing for a higher good, the public interest, through journalism and press freedom advocacy.