This article is part of Turkey Dispatches, a special IPI series on press freedom and the realities of practising journalism in today’s Turkey, written by those most directly affected: Turkey’s journalists and those who defend them.

I decided to quit my job as a managing editor at one of the largest media corporations in Europe, Turkey’s Hürriyet, after receiving two messages from students earlier this year.

The first message was from a fifth grader in Istanbul, Ada Sami Mecikli, who sent me a postcard on January 10 to congratulate me for Turkish Journalists’ Day. “I know you are working hard, day and night, knowing that you have a responsibility in reporting the truth in an unbiased way, to be our voice. Thank you”, he told me in the card. 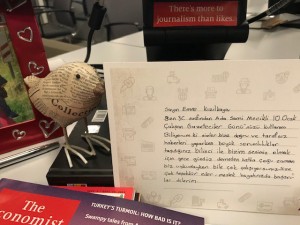 The second message came in the same week as an email, again from someone whom I had never met personally. A student journalist from a private university in Istanbul, whose name I will not disclose to protect her from potential repercussions, complained in the message that even her student newspaper was censored by officials. “We need a platform to learn and do journalism more independently and more efficiently”, she said before thanking me for my efforts to connect with her and her fellow students.

Last year, I had formed the New Media Network with hundreds of student journalists and young reporters from more than 30 provinces of Turkey. Since I quit Turkey’s daily Hürriyet, where I had worked for more than 15 years including as a digital executive for the last decade, I now have more time to focus on projects I have in my mind involving this network. These contacts have intensified as part of a new initiative with the International Press Institute (IPI), as well as my ongoing study for sustainable journalism as a Knight Visiting Nieman Fellow at Harvard.

In a country where the public is thirsty for high-quality journalism amid the ongoing repression of democratic rights and media freedoms, how can we empower thousands of youngsters who graduate from more than 100 journalism faculties in Turkey each year? What kind of journalistic skills and platforms do they need now, considering the outdated education in universities as well as the political and financial pressures on media outlets?

To answer these questions, which is the aim of the New Media Network and my current research, I decided to ditch traditional problem-solving approaches. Instead, I opted for design thinking, which aims to find and solve problems through a continuous process of ideation and iteration. With the help of several visionary academics and respected journalists, we started to convene groups of student journalists from across Turkey for brainstorming, mind mapping, role-playing and storyboard sessions to find the best way out of the current predicament.

In one of the sessions at Bilgi University a couple of months ago, student journalist Sait Burak Utucu said that “communication faculties are currently so incapable that they cannot follow the dizzying pace of technology”. Another student, Sema Kahriman, stressed that the current journalism curriculum is at the center of the problem.

The situation is desperate at most of Turkey’s public universities, where most graduates are far from being ready for journalism in such a difficult country for reporters. Aside from lacking the digital skills required in today’s world, many of them cannot even express themselves properly while writing or speaking.

Some private universities, like Bilgi, Bahcesehir and Kadir Has, have great New Media faculties but even their graduates struggle in the employment process because of the awful shape of the mainstream media in Turkey today. As Serap Can, an academic in the network, said, thousands of journalism graduates “pile up in Istanbul to find a media outlet to work but turn into desperate masses when they could not”.

According to the Turkish Journalists’ Union, more than 10,000 media employees are currently unemployed. Around 140 journalists are in jail. Censorship, as well as self-censorship, is rife.

Most people refrain from sharing their views honestly on social media, knowing that anyone can be the target of government retaliation. For example, on April 13, reputable economist Mustafa Sönmez was detained when police raided his home at 3:50 a.m. over his tweet in which a group of football fans were seen raising their beer glasses in a sarcastic toast to President Recep Tayyip Erdoğan.

Social platforms, like Facebook, are also too eager to censor content when they receive an official notice in order to avoid being banned in a populous country. Perhaps even worse, these platforms still encourage attention-seeking, divisive and sometimes manipulative content, instead of promoting trustworthiness and public interest.

A few media outlets outside the direct or indirect control of the Turkish government have also failed to consistently uphold the core principles of journalism, like accuracy and impartiality. Many of them reinforce polarization, instead of providing a pluralistic platform around the truth to sow the seeds of a better conversation, which could grow into a new “mainstream media” one day.

Facing this bleak outlook, thousands of undereducated and undertrained young journalists in Turkey feel themselves cornered, finding no alternative but to abandon the profession before even starting it or confining themselves to obscure blogs or underground magazines.

Still, I see a glimpse of hope in the eyes of many of these young people I meet. For instance, Samet Oz, who was one of the students I recently met at one of our brainstorming sessions in Istanbul, said he “has the willpower to create his own platform to report news and express ideas freely just to make a contribution to our society”. Young journalists from dozens of other cities invited me to collaborate in local journalism projects.

I usually try to explain to these younger colleagues where the media was and where it is headed in Turkey and the world after trying to infuse them with self-confidence in our darkest hour.

As I said in a recent interview with Journo, a Turkish news website focused on media innovation, “the currency of digital media is trust, its base is data and its language is design”. Sustainable news organizations have stopped playing the volume game to have a wider reach and instead begun returning to their true roots: Focusing on serving the public interest by engaging with their communities.

Why should any democrat still be pessimistic after seeing that even a strongman like Erdoğan, who controls almost all the media, suffered a heavy blow in recent local elections?

If today’s limited journalistic activity in Turkey can help the public check a government with seemingly unchecked power, imagine what a more professional, trustworthy and pluralistic media can do for our democracy.

We are asking these questions nowadays with hundreds of young journalists from dozens of Turkish cities and towns to find out how a sustainable and stable platform for public interest content and free speech could be formed to reinforce Turkey’s democracy. As one student wrote to me in a recent email: “My parents asked me why I insist on being a journalist despite all the risks. I told them: If not me, who?”